Agile aubergine! 10 easy, delicious vegan recipes to make in a rush at home – The Guardian 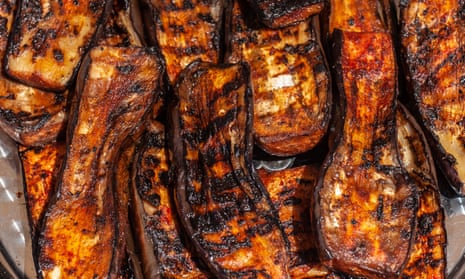 Agile aubergine! 10 easy, delicious vegan recipes to create in a hurry in the home

What do chefs turn to when they want a plant-based meal to cook after work? We asked for his or her top ideas for lightning-fast feasts

Esra Muslu , chef founder of Zahter , London
Aubergine is often found on Turkish tables. It’s this type of beautiful vegetable, and I love cooking it right over an open flame, which adds a good smokiness, and serving with chilli jam and crisp, fried garlic. Make sure all sides of the aubergine are cooked over the flame, then peel the skin. I make a chilli jam by mixing 250g sugar with 250g water until dissolved, then stirring in chopped chilli and lime juice to taste, and heating until thickened. Thinly slice 50g garlic and fry in oil. Place the aubergine on the plate and roughly chop. Sprinkle some salt and za’atar, and garnish with parsley, four or five fried garlic slices, the chilli jam and a drizzle of pomegranate molasses.

Neil Campbell , head chef at R ovi , London
I love celeriac – so many things can be carried out with it and none of them need to be fancy. Bake them like you would a baked potato, rubbed in essential olive oil and salt (they’re low in calories and higher in vitamins than spuds) until they’re caramelised on the outside and soft and fluffy within, then load up however you want. Confit garlic, mushrooms and herbs is a winner, or I love utilizing a homemade zhoug. Make this by blending parsley, coriander, green chilli, garlic and lemon juice with olive oil, then drizzle all over. Some chopped nuts work effectively with this, too.

Luke French , chef director at Jöro , Sheffield
A hero vegan ingredient for me is maitake mushrooms, that have an insane flavour. It is possible to sometimes see them in supermarket packets of mixed wild mushrooms. One of my favourite comfort dishes is a teriyaki maitake mushroom donburi (mushroom rice bowl) – I promise you it is one of the tastiest vegan rice bowls you’ll ever have eaten. Make a simple teriyaki by reducing 200g mirin with 300g light soy sauce by half, then stir in a sachet of miso soup paste and reserve. Next, brine the mushrooms by dissolving 10g salt and 20g caster sugar with 200g cold water, then submerge the mushrooms in it for 20 minutes. After brining, pat dry on kitchen paper, then cook on a hot barbecue grill (or fry in smoked olive oil) until charred and crispy around the outside. Glaze the mushrooms in the teriyaki dressing and serve on freshly cooked sushi rice/short grain rice, seasoned with a little rice vinegar/mirin/sugar/salt. Top with freshly chopped chives and crispy fried onions, and drizzle with more teriyaki dressing.

Gnocchi with cavolo nero and walnuts

Giovann Attard , executive head chef at Norma , London
I make a good gnocchi with cavolo nero and walnuts. Put 550g mashed potato in a bowl with 5g salt, 20ml olive oil and 300g 00 flour, and mix until it has formed a ball, making sure that it isn’t too wet and sticky. Taking a small piece at a time, form into a long roll around 2cm thick, then cut the roll into 2 . 5cm pieces. Place the gnocchi pieces on a floured tray, then cook by boiling in a large pan of boiling salted water until they float to the top. These are perfect with a cavolo nero pesto, made by placing 45g chopped and blanched cavolo nero in a blender with 100g walnuts, 5 tbsp essential olive oil, a bunch of basil leaves, two garlic cloves, 50g pine nuts, 10g vegan parmesan and ½ tsp each of salt and pepper. Blend until smooth. If the blender is struggling, add a bit of hot water from the gnocchi pan.

Aktar Islam , chef at Opheem , Birmingham
My go-to vegan dish is dal. I love it because it goes with everything; I have mine with bread or rice, with some pickles on the side. Heat a little oil in a pan over a moderate heat, add 1 tsp mustard seeds, ½ tsp cumin seeds, 2 . 5cm of chopped ginger, ½ tbsp chopped garlic and 20 curry leaves, then sauté for 30 seconds. Add a chopped onion and a chopped green chilli, and sauté until translucent, before adding 1 tsp red chilli powder, ¼ tsp turmeric powder and ½ tsp salt, then sauté for two or three minutes. Add 250g red lentils and 100g moong dal (make sure both have been washed and soaked) and enough boiling water to cover the lentils with 2cm extra, then cover and simmer for 20 minutes. While it’s cooking, prepare the temper by caramelising a finely sliced shallot and setting it aside. Using the same pan and remaining oil, add three finely chopped garlic cloves and cook until lightly brown, then add two whole dry Kashmiri red chillies, a pinch of asafoetida, ½ tsp Kashmiri red chilli powder and mix well, then pour over your prepared lentils.

Conor Gadd , head chef at Trullo , London
My wife and I often cook vegan meals at home and, when we do, it is a lot more about celebrating vegetables than it is attempting to do a vegan version of a meat dish. For a simple supper, I create a bruschetta of mixed greens using cavolo, kale, cime di rapa – things such as that. After taking them off the stalk, I chop the greens roughly and blanch them for just two to three minutes. While they’re blanching, I sweat garlic and chilli in a pan (twice as much as you think you’ll need), then add the greens and cook for a few minutes. Season with salt and a squeeze of lemon, and drench in new season Tuscan olive oil, then simply eat with some grilled bread.

Sameer Taneja , executive chef at Benares , London
Among my favourite vegan dishes to make is masala poori – which are Indian crispy, spiced flatbreads. They’re spiced with turmeric, coriander, fenugreek and chilli powder, and are delicious on their own or dipped into curries and sauces (my favourite has been a black chickpea curry). To create the masala poori, I prepare a flour and semolina dough (250g whole wheat flour, 25g semolina, 100ml water, 10g sunflower oil) and mix well with spices, resting for 30 minutes before kneading and rolling into small flat discs. Afterward you deep-fry until golden on each side (30 seconds or so) and nudge the discs around the pan, which encourages them to puff up, creating delicious crispy flatbreads. Simple but so tasty.

Jan Ostle , head chef at Wilsons , Bristol
At the restaurant we always have a vegan menu running alongside our regular menu, and often dishes from the vegan menu are so delicious that they move across. This caramelised onion yeast sauce is one of those that can be used for any hearty, savoury dish. Lightly caramelise six shallots and a clove of garlic. Roast 200g baker’s yeast at 160C until crispy. Add the two together, cover with water and simmer. Blend and pass through a sieve, then add a dash of sherry vinegar if it needs some acidity. It’s great with roasted root vegetables.

Judy Joo , founder of Seoul Bird , London
I love the silkiness of aubergines, and I have many memories of eating gaji namul, a colourful aubergine-based side dish. My mum would sauté the aubergine very carefully with chopsticks, so as not to bruise or discolour it. Asian aubergines work best because of this recipe as their skins are thinner and they are much sweeter in taste. Cut three Asian aubergines into finger-sized batons and toss in ½ tbsp salt. Place in an individual layer in a colander over a plate or in a sink and allow the excess water to drain off for 25–30 minutes. Meanwhile, make the sauce by whisking together two chopped garlic chives, 1 tbsp grated garlic, a thinly sliced spring onion, 1 tbsp gochugaru (Korean chilli flakes), 2 tsp roasted and crushed sesame seeds, ½ tbsp white sugar, 2 tbsp soy sauce and 2 tbsp roasted sesame oil. Reserve. Sauté the aubergines in oil for 2-3 minutes, then remove from heat, coat with sauce, season with salt and eat.

Sofian Msetfi , executive chef at Ormer Mayfair , London
My go-to comfort dish in January is really a vegan mushroom “ragu” on toast. It’s simple to make and perfect as a nourishing lunch or light supper. Grill a couple of slices of sourdough until golden brown, then drizzle with olive oil. Fry a roughly chopped banana shallot and a finely sliced garlic clove with some salt. After 2-3 minutes, add 300g chopped wild or button mushrooms with ½ tsp chopped thyme. Once cooked, add 40ml rice milk, 20ml balsamic vinegar and a squeeze of lime juice. Reduce until thick and the mushrooms are coated in the sauce. Spoon the ragu on top of the toasted sourdough and finish with 50g roughly chopped pistachios, the zest of 1 lime and a handful of watercress for garnish.